When Georgina and Tony Looker discovered they were having their third set of twins, they never imagined they would need the support of Ronald McDonald House Charities.

Harper and Nate arrived in the world nine weeks early, weighing only 1550g and 1650g, respectively.

Immediately after being prematurely born doctors discovered that little Harper was born with a very rare condition called Oesophageal Atresia, meaning her oesophagus was not attached to her stomach.

It was then that Georgina, Harper and Nate were urgently flown to Townsville by the Royal Flying Doctors Service only 12 hours after becoming a family.

Luckily Tony, big sister Makayla and big brother Bailey, were able to stay at Ronald McDonald House Charities North Australia just steps away from the hospital where Georgina, Nate and Harper were staying.

“We live in Clermont which is nearly a 300km trip to Mackay, so to be rushed to Townsville less than 12 hours after Harper and Nate arrived was an anxious time,” said Georgina.

“Ronald McDonald House was a life saver for our family. Tony, Makayla and Bailey were able to stay at the House, visiting the babies and me every day. I was very unwell and spent 10 days in hospital, and with Tony having to go home to Clermont before I was released, the awesome staff at Ronald McDonald House sorted a room for me on my release and arranged the older twins with schooling at the hospital.”

Baby Nate was nine weeks old when he joined mum and his two older siblings at the House.

Unfortunately, little Harper needed lifesaving surgery to reconnect the two ends of her oesophagus. The odds were very much stacked against her, with only a 40% chance of surviving the surgery as she was also sick with pneumonia.

Thankfully, Harper’s surgery was a success and she was finally able to join her family at Ronald McDonald House at 92 days old.

“Ronald McDonald House is so important to us because it allowed us to stay with our sick babies, and Tony and the other children had somewhere to stay every time they made the 1000km round trip from Clermont,” said Georgina.

“If it wasn't for Ronald McDonald House I don't know what we would have done.” 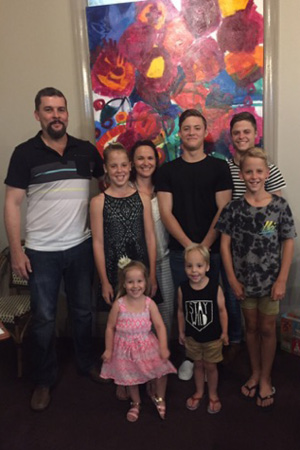 After four months at Ronald McDonald House, the Looker family finally headed home, and the future is looking bright for little Harper and Nate.

Although Harper has had 10 surgeries so far with more on going, the twins have recently celebrated their fifth birthday, and have just started kindy. Even though the family was recently back at Ronald McDonald House due to Harper’s ongoing medical issues, Georgina said that life could not be better.

“Thanks to all the awesome doctors, surgeons and nurses at Townsville Neonatal Intensive Care Unit and the very awesome Ronald McDonald House Charities North Australia staff and volunteers for being a part of our long journey to help bring home two healthy babies that have grown into two beautiful people who have completed our family!”

Learn more about our charity partner Ronald McDonald House Charities, how you can donate and show your support for the incredible work they do for our Queensland families.